A billion euros in undeclared income

Undeclared funds withdrawn by shareholders and self-employed individuals account for a significant part of the total value of undeclared work. Entrepreneurs cover as much as three quarters of undeclared work and wage earners roughly a quarter. 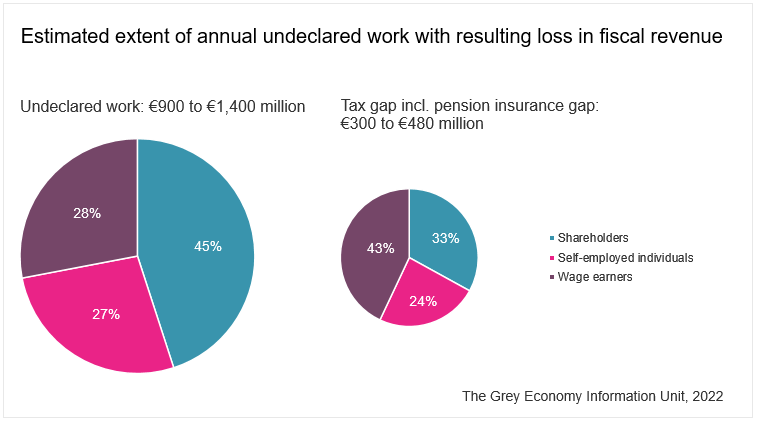 Undeclared wages are paid to employees in such sectors as food and beverage services and construction, in which the general level of wages is low, services are produced through work, and the use of cash is common. In these same sectors, shareholders of smaller limited liability companies, in particular, obtain income from their companies without paying taxes. Among self-employed individuals, food and beverage services and transport are significant sectors for undeclared work.

Undeclared wages not only cause losses of income for society through taxes and social insurance contributions but they also have a more extensive impact on pensions and benefits, including sickness and housing allowances. In the most flagrant cases, the impact on society multiplies if taxes on wages are left unpaid while unfounded social allowances are being withdrawn.

The Grey Economy Information Unit has now investigated undeclared work and estimated its value in 2014–2020. Undeclared work was studied based on data by using a number of different methods, taxation and tax audit data, and data compiled and collected by Statistics Finland. Four separate reports and their concise summary have been published.

Read the full reports in Finnish:

What does undeclared work mean?
Normally, undeclared work and wages mean wages that are paid to employees but not reported to the authorities, and from which no taxes are withheld and no social insurance contributions are paid. In the reports prepared by the Grey Economy Information Unit, the concept of undeclared wages was defined broadly to also cover any undeclared funds and benefits withdrawn by shareholders of limited liability companies. Any income concealed by self-employed individuals and unfounded expenses aimed to avoid the payment of taxes were also regarded as undeclared work.

Not everyone pays as much VAT as they should

Groundless requests for VAT refunds are not the only form of VAT-related fraud. Abuse and errors also occur if some part of a VAT return is not filed and paid.