Studies on the shadow economy

A light entrepreneur is treated as a wage earner for tax purposes. However, according to the prevailing labour law interpretation, a light entrepreneur in a commission relationship serves as an entrepreneur that sells services through an invoicing service company without having a company of their own (business ID). 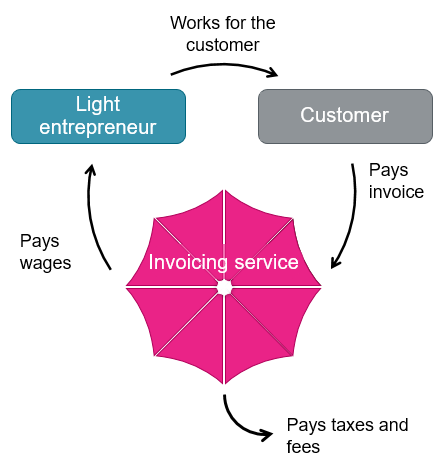 Light entrepreneurship is growing at a tremendous clip

How do light entrepreneurs attend to their obligations compared to self-employed individuals?

It has been suspected that debtors in enforcement proceedings use invoicing services in an attempt to avoid the garnishment of their income. Individuals may also use these services to circumvent a ban on business operations, as a light entrepreneur is primarily considered a wage earner rather than an entrepreneur for tax purposes.

Are Estonian companies used as tools of the shadow economy in Finland?

Finns have many links to the Estonian business world. However, merely establishing a company in Estonia does not confer tax benefits if its operations are led from Finland.

There are various ways to evade taxes in the car business

Car sales and imports have been found to be vulnerable to the shadow economy.

Legislation governing the taxi business was thoroughly revised in summer 2018. The revised legislation has ushered in new challenges in tackling the shadow economy.

Payment information is required for effective control of e-commerce

Information from payment processors would enable the tax authorities to form an overall picture of e-commerce business and control compliance with tax obligations. The largest share of payments for European consumers’ purchases from online stores outside the EU are handled through payment processors. Without information on these transactions, it would be difficult for the authorities to identify online stores in third countries and their sales volume.

Concealment of income and assets from the tax authorities has become more difficult during the past few years. Consequently, individuals who were earlier utilising bank secrecy for tax evasion purposes have been trying to find new ways to evade taxes.

Foreign-owned companies registered in the Finnish Trade Register have tax-related reporting and payment irregularities far more frequently than those managed by Finnish persons.

Food frauds on the increase – difficult to control

The food sector is vulnerable to fraudulent activities: the risk of being caught is small, the profits are often high and the sanctions for any crimes tend to be low. The common motivator in food-related crimes is financial gain. In most cases, such crimes are financial offences, and often also hidden crimes.

A person’s criminal record is important to assessing the risk of involvement in the grey economy. There is a connection between the criminal record of a responsible person and their management of business obligations. However, strict limitations are in place on the usability of criminal intelligence in official supervision.

Working Group of Finnish Tax Administration proposes the introduction of fiscal online point-of-sale systems in Finland. These systems send data of sales transactions to the Tax Administration. In Finland, the systems would be introduced in some 170,000 companies engaged in consumer sales.

From an employee into a self-employed individual – is the tax risk dispersed to small companies?

Small entrepreneurs have been in focus in many of the Grey Economy Information Unit’s reports. Nearly half of the limited liablity companies studied were owned and managed by one person. In every second enterprise of a self-employed individual and every third business operating in company form, net sales were below €15,000.

Companies with outstanding employment pension contributions often also have irregularities in the management of their other statutory obligations. Typically they also owe money to a large number of creditors.

Suspected crimes detected during tax audits were screened in Raksa

The majority of the people sentenced had utilised more than one company. Other typical features of these crimes included the use of straw men and companies with a short lifecycle, fake sales receipts and falsified invoices. The proceeds of crime were often used to pay wages “under the table.”