On the shadow economy and economic crime website, different public authorities introduce their operations in relation to the shadow economy. The website content is produced in collaboration with the ministries and public agencies appearing on these pages. 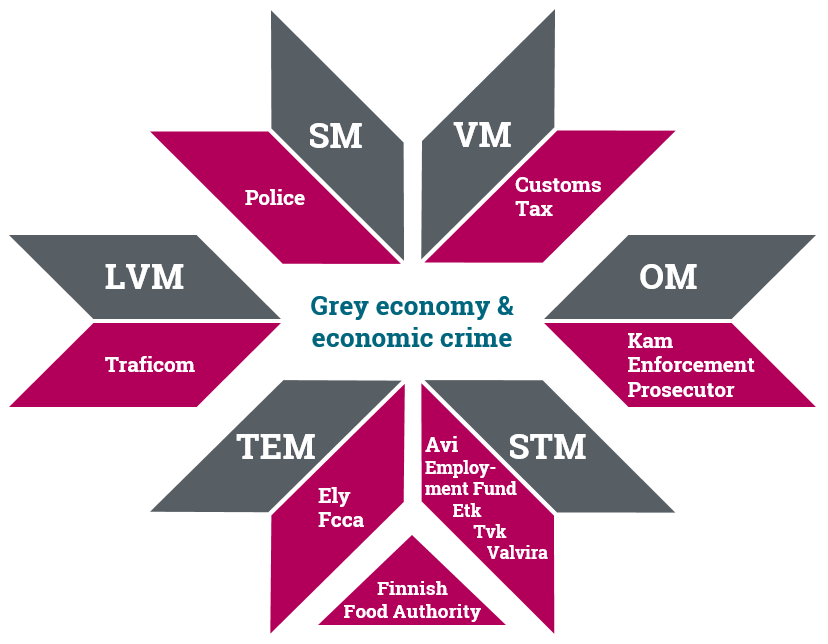 Ministry of the Interior

The Ministry of the Interior is the ministry that oversees internal security and immigration, as well as activities such as policing. Its key tasks include legislative drafting and the strategic planning, control and supervision of its administrative sector.

The measures taken and crime-prevention priorities of the supervisory authorities affect the number and nature of economic crimes reported to the police. Most requests for investigation received by the police are made by the Finnish Tax Administration and receivers of bankrupt estates. Economic trends also tend to affect police investigations of economic crime.

In the years 2012–2016, Customs collected EUR 207 million in unpaid fees to the State on the basis of company and documentation audits. In the same period, its economic crime prevention activities accrued EUR 113 million to the benefit of the state. The number of cases of tax fraud uncovered and investigated by Customs rose by around 73% between 2012 and 2016. The number of tax fraud offences of all types has increased. A total of 58% more cases of aggravated tax fraud were detected last year (2016) than in 2015.

The shadow economy impacts on the prosecutor's work when actions taken to combat the shadow economy have resulted in crime reports and tangible suspicion of an offence. The prosecutor must be actively involved in the pre-trial investigation, handling the matter all the way to its conclusion, i.e. a legal judgement. In such processes, bringing the perpetrators to justice tends to take years.

The Ministry of Finance safeguards the future

The Ministry of Justice maintains and develops legal order and legal protection, and oversees the structures of democracy and the fundamental rights of citizens. The Ministry is responsible for the drafting of the most important laws, the functioning of the judicial system and the enforcement of sentences. As a part of the Government, the Ministry of Justice lays down guidelines for legal policy, develops statute policy and directs its administrative sector.

The Enforcement Authority fights the shadow economy and economic crime

In Finland the enforcement authority is a part of judiciary. Enforcement officers / bailiffs are civil servants and carry out court rulings and collect directly distrainable receivables, such as taxes, fines and insurance contributions. The enforcement officers seek to combat the shadow economy and economic crime through their statutory tasks; that is, efficient enforced collection.

Bankruptcy Ombudsman is an independent special authority supervising the administration of bankruptcy estates. The Ombudsman is attached to the Ministry of Justice with branch offices in Helsinki and Tampere. The duty of the Ombudsman is to see to the effective, economical ja prompt administering of bankruptcy proceedings and restructuring of enterprises.

Ministry of Social Affairs and Health

One of the statutory tasks of the Finnish Centre for Pensions (ETK) is to supervise earnings-related pension insurance. Employers that fail to take out earnings-related pension insurance gain an unjustified competitive advantage over employers that comply with their obligations. ETK combats the shadow economy with extensive register comparisons and tip-offs from other authorities.

The Employment Fund provides security for changes in working life

The Finnish Workers’ Compensation Centre (TVK) contributes to the fight against the shadow economy by carrying out checks to establish whether employers have complied with their insurance obligations. The process begins by a comparison between insurance register data and payroll records obtained from the Finnish Tax Administration. Any employers who have paid wages but have no workers’ compensation insurance are investigated more closely.

The key task of the Ministry of Economic Affairs and Employment (TEM) is to create good preconditions for business and industry, thereby improving employment and Finland's competitiveness. TEM is responsible for ensuring a good business environment for entrepreneurship and innovation, the functioning of the labour market, the employability of the labour force, and regional development. The objective is a business environment in which companies have a level playing field.

Alcohol administration means the overall system of licensing administration, control and steering formed by the National Supervisory Authority for Welfare and Health (Valvira) and the regional state administrative agencies (AVI), which act as the alcohol authorities. The core task of the alcohol administration is to prevent the harm caused by alcohol to its users, other people and society as a whole, by controlling and limiting alcohol-related business activities. This core task forms a sturdy buttress and foundation to be part of the network of authorities combating the grey economy.

The new Act on transport services (Act 320 of 2017, only available in Finnish) relaxes regulation considerably and reduces the administrative workload of road transport operators while also creating equal operating conditions for current and new businesses on the market. The Finnish Transport and Communications Agency takes over the responsibility for processing transport licence applications, issuing licences and supervising licence holders from regional Centres for Economic Development, Transport and the Environment.

The Finnish Competition and Consumer Authority (KKV) has several contact points with the shadow economy, particularly in relation to procurement supervision, cartels and corporate and consumer fraud. In addition, the KKV is involved in helping to lighten the regulatory burden associated with measures for fighting the shadow economy.