Large Taxpayers' Office's taxpayers have a possibility to contact Finnish Tax Administration to discuss about relevant tax matters. Pre-emptive Discussions may be applicable when multinational enterprise (MNE) plans some changes affecting its operations and needs guidance for tax matters.

Aim is to get things right from the start

Pre-emptive Discussion is part of Finnish Tax Administration's preliminary guidance and is based on authority's obligation to guide the taxpayers. During the process of Pre-emptive Discussion the aim is to clarify the goals and possible consequences of the actions performed or to be performed by the MNE. The need and wideness for preliminary guidance will be determined during the process. MNE may present several actions planned and ask for the interpretation of the possible tax consequences. Nevertheless, it should be noted, that MNE is responsible to choose the option to be executed.

Applicable to all tax topics

The key aspect of the Pre-emptive Discussion process is to clarify the question and matters related to any tax type as well as single out possible tax risks.

Discussions are usually held between the tax advisors of Large Taxpayers´ Office and the representatives of the MNE. The head advisors of Finnish Tax Administration may participate, if necessary.

After the process has ended, a written memorandum will be prepared and delivered to MNE via MyTax e-service and secured email. When separately requested, Large Taxpayers' Office may provide MNE written guidance within the memorandum. Guidance is binding towards Finnish Tax Administration when the facts and circumstances provided by the MNE shall actualize during meeting(s) and/or discussions and as written in the memorandum.

In case the tax question presented is interpretative, lacks of clear legal praxis or parties disagree on the interpretation of the law, Finnish Tax Administration may recommend the MNE to apply for Advance Ruling that is applicable also for an appeal, if necessary.

It should be noted, that in case of cross-border transactions, Finnish Tax Administration might be obligated to file the memorandum to the applicable registers of EU and OECD.

If you find a need for Pre-emptive Discussion, please contact us by email konserniverokeskus(a)vero.fi. You may also contact any Large Taxpayers' Office's tax adviser directly with your request for discussion. 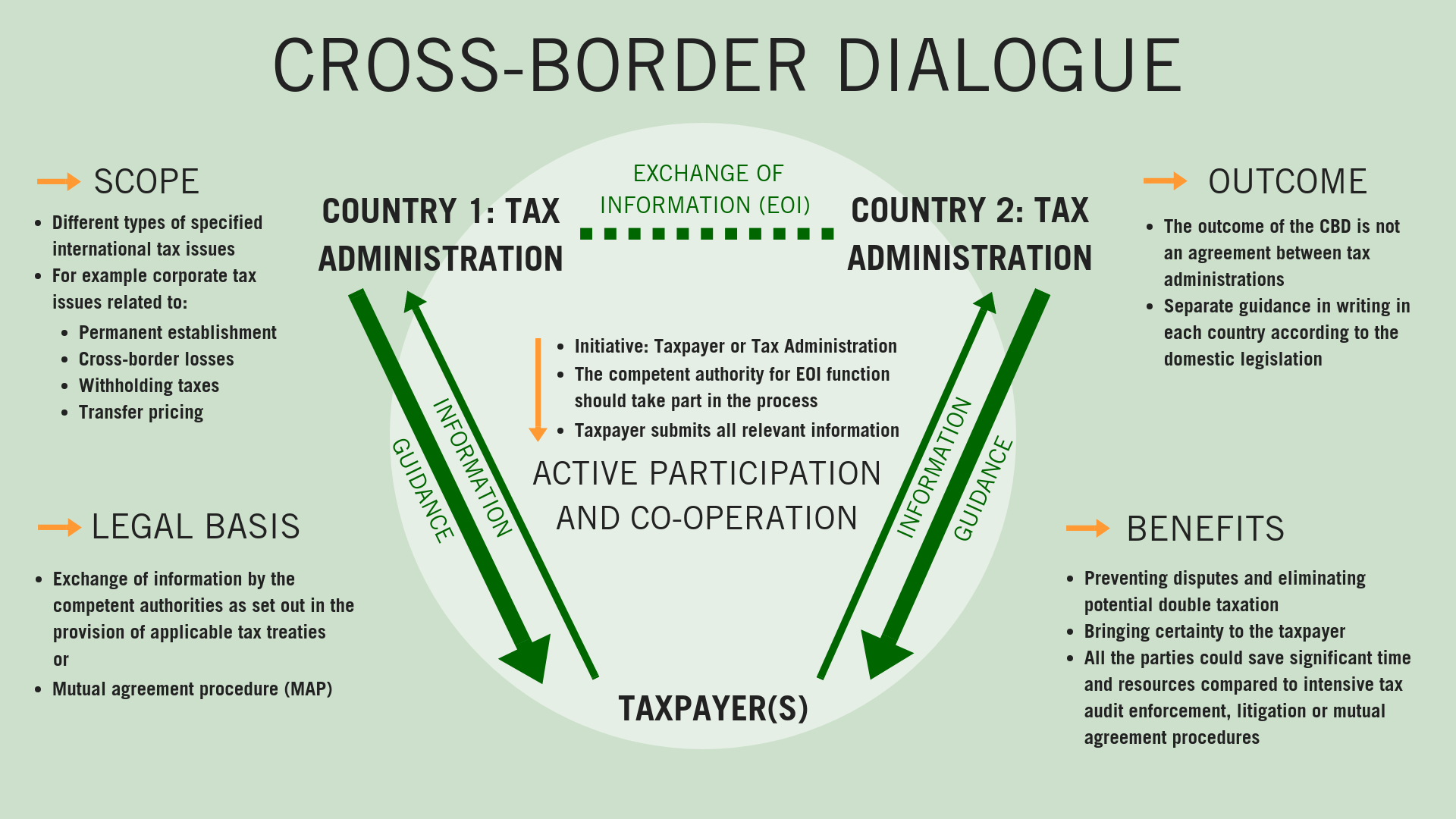 The goal for Cross-Border Dialogue is to solve the taxpayers' tax matter cross-border i.e. the participants of such discussions and solving the matter would be tax authorities of two or more countries, the taxpayer itself and/or its representatives. Tax authority´s positions would be based on the interpretation of each country´s domestic tax legislation.

Cross-Border Dialogue should be considered as a way to provide certainty to taxpayer's tax matter − not as a method to secure mutual understanding of the interpretation of legislation between two or more countries. Nevertheless, if there exists a situation where interpretation of the tax legislation presented by the taxpayer and/or its representative should not meet the position of the tax authority, the taxpayer has an opportunity to take the matter into binding Advance Ruling process. Advance Ruling given is applicable for an appeal.