Finland is the first country in the world that introduced the TRACE procedure to withhold tax at source on dividends. The first year showed that the procedure works well. Following the introduction, more than 70% of the Authorised Intermediaries granted tax-at-source benefits at the time when dividends were paid.

The TRACE procedure (Treaty Relief and Compliance Enhancement) is applied to foreign investors investing in Finnish listed companies. When the procedure is applied, a bank pays the shareholder’s taxes in accordance with valid tax treaties and the taxpayer can obtain tax treaty benefits at the time of payment.

Annual information returns on dividends paid in 2021 were filed in early spring 2022. These returns also contain dividends paid on nominee-registered shares under the new TRACE procedure. The new procedure worked well in the reporting of dividend details: on the technical side reporting went smoothly and correct information was received. The returns now give a better picture of the use of reduced tax rates.

Tax treaty benefits were widely granted in the first year

Based on the annual information returns, Authorised Intermediaries often made use of the opportunity of granting tax treaty benefits at the time of payment. Reduced tax-at-source rates in accordance with tax treaties were applied to more than half of all the dividends paid on nominee-registered shares in 2021.

When a reduced tax rate was applied, the tax withheld at source was most often 15%. The 0 rate was also often used. Based on the number of dividend payments, most (81%) dividends with reduced tax rates were paid to private investors, fewer (19%) to corporate entities. In euros, however, most dividends were paid to corporate entities. It is worth noticing that the TRACE model also provided tax-at-source benefits for retail investors already in the first year.

– After the introduction of the TRACE procedure, we see a clear spike in the growth of tax revenue, says Katja Pussila, Risk Manager at the Tax Administration.

– The revenue from tax at source has been growing since 2018. We sought growth, and part of it resulted from our improved control. Partly the growth in tax revenue in 2021 is explained by the new system, which takes a few years to become established. We expect the growth to slow down once TRACE is established, says Pussila.

Katja Pussila also states that the number of refund applications related to tax at source will increase temporarily.

– We can see moderate growth in the number of tax-at-source refund applications, especially as regards individual taxpayers, and we expect the growth to continue for the next few years. We anticipated this to happen as the legislation was amended, and it is explained by the introduction of the new procedure. The Tax Administration is well prepared to process the applications, says Pussila. 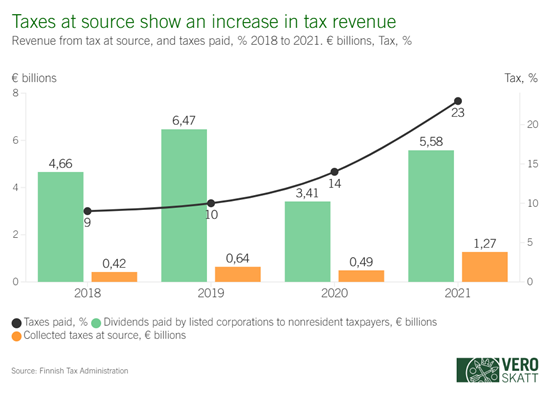 Katja Pussila says that the benefit produced by TRACE is that the investors’ administrative burden decreases.

– With TRACE, laborious refunding of tax at source will be avoided. The TRACE procedure is based on an international standard, which also makes it easier for foreign banks or other intermediaries to take it into use. This streamlines processes and helps to make sure that taxes are paid as they should.

– The TRACE model also makes it easier for the Tax Administration to receive information about the chains of custodians and dividend beneficiaries of nominee-registered shares. With TRACE, we can better identify the beneficiaries whose information contains anomalies, and allocate our control resources to high-risk cases, says Pussila.

The procedure is being developed based on customer understanding

As the TRACE procedure was being implemented, the Tax Administration extensively collected customer understanding in different stages of the introduction.

– We surveyed different situations and challenges in taxpayer and stakeholder events, which helped us implement the solutions and instructions in a customer-oriented manner. Based on our discussions with the financial sector, we created a path diagram, for example, which describes the different stages of the Authorised Intermediaries’ transactions and the channels available. We will keep the dialogue going and encourage the sector to pinpoint problems and lacking instructions, says Antti Santalahti, Customer Relations Manager at the Tax Administration.

– We will continue our efforts with the aim that more and more investors could obtain the tax-at-source benefits at the time of payment. Naturally, it will take a few years before the new system is fully in operation and the resulting practices are established. However, the first year has shown that the system works as intended and can yield the benefits expected, says Katja Pussila.